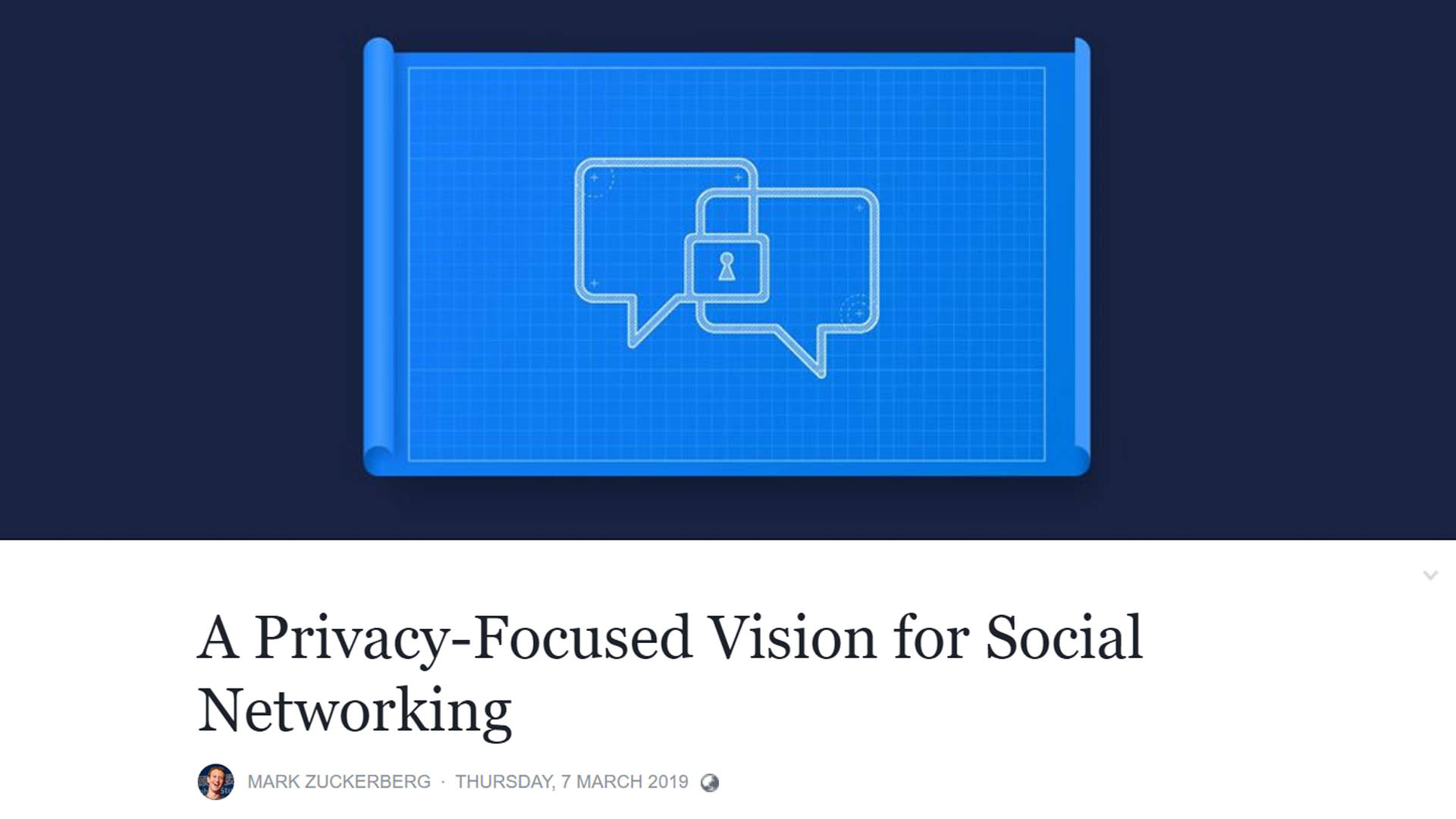 A Privacy-Focused Vision for Social Networking

Today (March 7, 2019) Mark Zuckerberg announced a new direction for Facebook and its associated platforms. He said…

My focus for the last couple of years has been understanding and addressing the biggest challenges facing Facebook. This means taking positions on important issues concerning the future of the internet. In this note, I’ll outline our vision and principles around building a privacy-focused messaging and social networking platform. There’s a lot to do here, and we’re committed to working openly and consulting with experts across society as we develop this.

Contrary to Australian Government encryption plans, Facebook will increasingly shift its focus away from public posts to encrypted, ephemeral communications on its trio of messaging apps. Zuckerberg says that encryption will be one of the keys to Facebook’s future and that the company is willing to be banned in countries that refuse to let it operate as a result.

Today we already see that private messaging, ephemeral stories, and small groups are by far the fastest growing areas of online communication. There are a number of reasons for this. Many people prefer the intimacy of communicating one-on-one or with just a few friends. People are more cautious having a permanent record of what they’ve shared. And we all expect to be able to do things like payments privately and securely.

In a sharp reversal for Facebook, Zuckerberg said public social networks have their place, but he sees a large future opportunity built on “a simpler platform that’s focused on privacy first.”

Facebook has grown into one of the world’s wealthiest companies by personal data collection and allowing brands to sell advertising against it.

I believe the future of communication will increasingly shift to private, encrypted services where people can be confident what they say to each other stays secure and their messages and content won’t stick around forever. This is the future I hope we will help bring about.

Facebook will look to roll out the WhatsApp model across it’s social platform.

We plan to build this the way we’ve developed WhatsApp: focus on the most fundamental and private use case — messaging — make it as secure as possible, and then build more ways for people to interact on top of that, including calls, video chats, groups, stories, businesses, payments, commerce, and ultimately a platform for many other kinds of private services.

People want to know their data is stored securely in places they trust. Looking at the future of the internet and privacy, I believe one of the most important decisions we’ll make is where we’ll build data centers and store people’s sensitive data.

Facebook says a lot of this work is in the early stages, and they are committed to consulting with experts, advocates, industry partners, and governments — including law enforcement and regulators — around the world to get these decisions right.

The Verge reported: News of that move spurred criticism that it represented one more massive data-collection play from Facebook, which once promised European regulators that it would keep WhatsApp user data separate from its other services. Zuckerberg is now using the promise of encryption to sweeten the deal — and attempt to reverse years of reputational damage by proclaiming a near-religious belief in the power of privacy.

In addition to making messaging more private, Zuckerberg also plans to make messaging interoperable. That will start by allowing you to message between Facebook services, but Facebook eventually wants to make Instagram Direct, WhatsApp, and Messenger interoperable with SMS.